Can it ever be Too Early for Christmas

This week our first Christmas card (It is still October) arrived from England.  Thank you aunt Belle the message is sweet.   The card said;
Christmas Greetings,
Peace, goodwill and gladness
Are shared by one and all,
When Christmas time draws closer
And snowflakes softly fall.
For sharing Season’s Greetings, heart-felt and sincere,
Will set the seal of Christmas upon a glad New Year.
This card reminded me that I must get it going on.  Once again I have not started shopping for any gifts yet and it is Halloween weekend!  What a slacker.   Each year my intention is to have all my shopping done by the end of November, and each year I fail.  How soon should I be sending out my cards?  If you want one, send me your address.    : )
Believe me, I do love all aspects of the holidays, crisp white snow, yummy food, big fluffy snowflakes, happy smiley faces and dreams beautifully wrapped, and tied with a satin bow.
Posted by ToBlog today at 12:37 PM 2 comments: 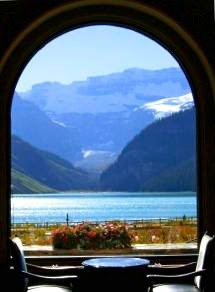 For years I have been gently pushing my hubby to finish his book.  And I've been bugging him to post in his blog.  Today he did both.

Writing is personal.  All the thoughts, words, characters, places, come from deep within.  It's a labour of love which takes time and energy.  Hours of massaging the plot, defining the characters and word smithing goes into it before it is ready for other eyes.   Thus by the time a writer sends his manuscript to an agent he is ready to have his story be transformed into a book.  Moreover, he is mentally prepared for whatever feedback might come his way.  That is brave.
Posted by ToBlog today at 4:38 PM No comments: 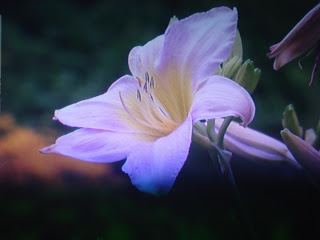 Initially, I didn’t want to blog about this because it is too horrifying.  But then I thought that if I blogged about how I was feeling then I could move on.

I caution you when you click on the above link. Use it only for background information and refrain from reading the more graphic links. I say this because I don’t want you to be affected by its contents as I have been. My mind has been in a fog for the past week after following the trial. I could not get my mind to stop thinking about what happened to Col. Russell Williams’s victims.  Col. Williams is a deprave murder who carried out heinous acts devoid of any emotions. I wake up and go to sleep thinking about it.   Thankfully, Williams was sentenced to 25 years without parole yesterday.  He was also stripped of his military rank and dismissed from the military.
I know, I really should not have read the live news reports from the Belleville Court but once I started reading I could not stop. It became an obsession.
Before this I would often leave my house unlocked when I went out.   No more, I now alarm the house when I leave.  I double-check the doors and windows to ensure everything is locked when I go to bed.  I think about what it must have been like for the victims thinking that they were in the safety of their home.  One even calling her boyfriend to say she made it home okay.  Your home should be a safe haven.
No sooner did the court allow media to report from the courtroom, they were posting live. Which brings me the question of why the media released so much raw details about the crime.  Every horrific and despicable act was reported.  The reason this information was even available was because Williams himself compulsively videoed, organized and recorded meticulous copious details of his crime.
If reading these news reports impacted me so adversely, a person, who is not associated to either of the victims or the perpetrator, makes me wonder how others are coping.  I can’t imagine how people closes to them have reconciled their feelings after becoming aware of the intimate details of the crime.
What has become of our society?   The Internet has made news so readily accessible in real time, and often reporters upload information without applying any moral or ethical filters.  What may on the surface be considered good reporting because it is immediate can in fact be quite damaging and excessive.  Case in point, the Williams’s trial.  Should media be more cautious about the nature of their reporting, or is the responsibility ours to not read or watch the news we find objectionable?
Posted by ToBlog today at 1:45 PM 2 comments: 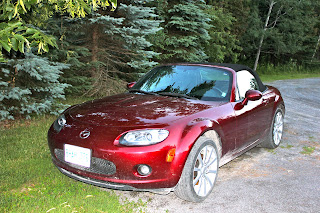 Hubby bought himself a new toy car.  Since the day we met he has always wanted a miata, which I teased was a girly car. You may disagree, but I think even the name sounds somewhat feminine.
Before he bought it, he leased one (pictured above) for a year to try it out.  I'm sure, he was demonstrating  a sincere effort that this was indeed not  an impulsive buy.  This fall at the end of the lease he decided to buy the new 2010  model with a retractable hardtop in bright red.  Bravo for him, after all men need something shiny that goes zoom now and then.

In an effort to appeal to more men the Miata was redesigned with an aggressive front end and new looking bumper. The new design is significantly manlier with more horsepower and a bigger body.    Over all it looks pretty damn good, they even added MX5 to its name a few years ago.   Oh yeah! I think men love initials, especially ones with an “X” in them.

In the last couple of weeks  hubby has been away on business and being the nice guy he is, gave me permission to play with it (probably secretly hoping I don't love it too much).   So, I have been zooming all around town.  I have to admit it is a pretty fun car, but then again I am a sucker for standard red convertibles …shifting one, two, three, four, five and six…. Zoom!
Posted by ToBlog today at 1:42 PM 6 comments:

To the Farmer's Market I go! 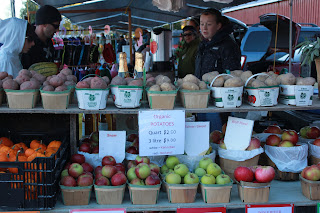 It was a cool crisp morning, the kind of morning where you can actually see your breath when you blow on your hands,  but that didn’t stop me from going to the Carp Farmer’s Market bright and early.  Leaving while everyone in the house was still sleeping soundly.  I hadn’t been to the market since last fall because I had produce from my wee garden all summer.  This year my garden was absolutely crazy, everything I planted grew to an enormous size!
The tomatoes, potatoes, and carrots, were absolutely exquisite and sweet.  Alas, I only planted enough for consumption over summer.    I do still have tons of harvest tomatoes, which I pop into my mouth like candy.  I can’t find the word to accurately describe how freshly harvested vegetable makes me feel.  Simply put, it makes me feel happy! 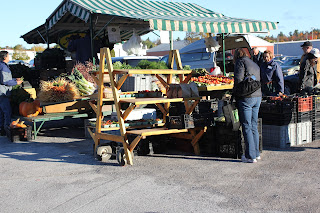 It goes without saying that I go to the farmer's market because of the very fresh vegetables and freshly baked good.  But equally important is that I also like to support the local farmers.  Besides you’re guaranteed to meet some pretty interesting folks there.   Each vender I approached welcomed me with a warm smile, some as they rubbed their hands together to keep warm.   Everyone is friendly and willing to tell you a story if you are a willing listener.  I learnt a few things about bees that I didn’t know.  My knowledge of bees was limited to Farmville on facebook I am embarrassed to admit. 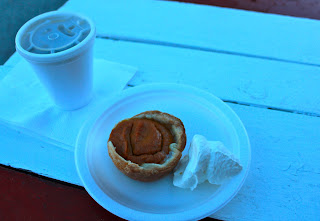 After paying for my stuff and taking it to the car, I decided to stay at the market a bit longer, have a nice hot tea, and a pumpkin tart that just came out of the oven just as I arrived.    The lady serving me said to let it sit at least five minutes before eating, but I couldn’t wait that long… scrumptious.
Posted by ToBlog today at 12:38 PM 4 comments:

I made tentative plans to meet a friend who was in the city on business.  Unfortunately, her meeting went too late for us to actually meet in person because of where I live.  So, we spent almost two hours on the phone, (not a cell phone) very late into the night getting caught up.  Imagine using a landline phone to communicate... kind of old fashion huh.   However, it is still a very effective way of communicating believe it or not.

10 good things about having a landline phone


10 - Does not die in mid conversation
9 - Does not have to be affixed to your body
8 - Feels like you’re actually talking to someone and not into thin air
7 - You don’t have to say…”“Can you hear, how about now, or "how do I sound"…do you hear the echo, too?”
6 - You don’t feel pressure to end the call because of limited minutes
5 –You know when the line goes silent it is not because the phone died
4 - You know when you call someone they are where you called
3 -  It is only used for one purpose, talking
2 - It does not call random people on its own
Number 1 reason - I know every time I pick up the phone I can actually call out because it does not rely on batteries, cell coverage, or minutes available, and it's one less thing for me to worry about.
Posted by ToBlog today at 9:28 AM 4 comments: