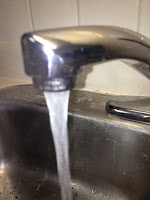 Our kitchen sink faucet was leaking, and every time I used it, I would be drenched.  It basically needed to be replaced, so I went to Home Hardware and bought a new faucet. I placed it on the counter next to the sink.

It didn't take hubby long to get the hint, he being a smart guy and all. 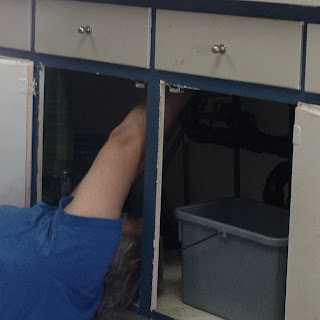 There was a lot of cussing and grumbling and more grumbling.  Water was leaking and spraying all over him and onto the kitchen floor.  "I hate this!" he kept muttering under his breath.  He needed a new part, so off he went to buy it.  He returned with the required part and a new attitude.  He said, I am doing this without any drama.

Sometimes, even a lawyer can keep his cool under the sink, dripping wet.  Who needs a plumber when you have a handy guy around the house who takes a step outside his comfort zone to please his wife. :)
Posted by ToBlog today at 5:18 PM No comments:


I just returned from a whirlwind trip to Vancouver Island. It didn’t start off as a pleasure trip.
It began with a startling text message from my sister, Rose, who was in an extremely perilous health condition.  Having just been informed by her internist that she was at risk of dying because her liver was not working.  I acted quickly and emailed another sister, Mary, the subject line of my email was “road trip?”

Without hesitation she responded by booking her flight, and we agreed to meet in Victoria, BC and drive up together for the 3-hour drive to Port Alberni where our sister was hospitalized.  We had no idea what we would be seeing when we got there, but you can imagine that our thoughts were rapidly creating all sorts of scenarios, and, all of them grave. I even packed black clothes in case the trip ended with a funeral.

That morning in Victoria, BC, I texted Rose to let her know that I was going on a weekend drive, and my sister Mary also texted her saying she was going for a drive.  Both of us live about 2500 miles apart, so we hoped she wouldn’t connect the dots.  Hee, hee, hee!!!

When we got close to the hospital we sent another text, mine stated: "Done my drive, now I will be visiting.  Love you."   Mary’s text was “Thinking of you sis, and feeling so close to you.”  She responded to Mary’s text saying, “discomfort by the bloating.”  Mary texted back, “You need a distraction!”
Within minutes after the last text we were in her room.  She was nowhere to be found; we looked around the ward and then went back to her room.  She was in the bathroom. Whew!  We drew the curtains around her bed and waited, and when she moved the curtain back she saw us.  Her eyes were as big as saucers, and her smile lit up the room.

But she was horribly yellow with jaundice, which made the whites of her eyes a yellowish colour, the likes of which I’ve never seen before.  The results of her blood tests indicated that she was close to succumbing to a coma. My heart sank, knowing that she was indeed in a very critical condition. However, it was encouraging to see that she was walking of her own accord and eating.  She was placed on a low protein diet.

When I saw her dinner, I must say I was not surprised, but still I could not believe what she was served on her “special diet”.  On her tray were battered fried fish, mashed potatoes, waterlogged vegetables, canned fruit cocktail, and a glass of milk.  I could only describe the food as dead.   The food had been prepared in Toronto, all the way across the country, frozen, and then thawed on the west coast, where there is no shortage of fresh fish and other nutritious local foods.  I know all hospital food is frozen then reheated at the hospitals. This is a cost saving method at the expense of the patient’s health when they most require nutrient for healing.

Fortunately, I was in a position to provide Rose with fresh pressed juices from The People's Juicery in Vancouver, BC.  She had ten 16 oz. bottles of cold-pressed juice, enough for two days.  She immediately went on a two-day juice fast, drinking water in between the life-giving green juices.
After two days of drinking cold-pressed green juices, Rose’s blood test showed a great improvement and her doctor was astonished at the change in their readings. She was discharged from hospital a couple of days later.

Food is indeed medicine! If I had any reservations before this, they are certainly dismissed now.  Although, I admit that the fact that we, and other people, who prayed and who visited her also gave her healing energy that help in the healing process.

We left our sister light-hearted, knowing that she was healing in an extraordinary and natural fashion. A trip that began ominously, ended with laughter, and a promise of a brighter future for Rose.  It's important to remember what we put into our body becomes us, so, eat whole living foods.  It's never too late to adjust your taste buds towards a healthier diet.  :)

Posted by ToBlog today at 5:08 PM No comments: