Not Just a Pet

Dogs lived in the hills behind our house in Doghead, Fort Chipewyan, Alberta.  I don’t recall them ever being allowed in the house, even in the -30C degrees in the dead of a northern Alberta winter.  The best analogy I can give of our team of dogs is that they were employees.  Work dogs.  Sled dogs.  Dogs were essential aspect of the Denesuline since the mid 1850’s; they packed food and were used as transportation.  Our dogs, in exchange for their loyal work, were well cared for. They were all very healthy, and by all accounts, very happy dogs.

The distinct smell of certain type of dog food transports me to our little kitchen watching as my dad stirred a big pot of dog food on top the wood burning stove.  The only dog I remember playing with was Curly.  She was the breeder and had special privileges like not being tied up in the hills. I have very fond memories of her and how special she was to our family. We also had another domestic dog, which my big sister brought home from the mission one summer.
I never thought I would own a big breed dog, certainly, not one that would share the house.  Since we no longer required dogs to haul our stuff and transport us what was their job in today’s society, I mused.  Their purpose, I soon realized was a surprise that was literally a breakthrough in how I relate to dogs now.
When our son was two he wanted a dog. Hubby and I discussed the possibility of having a dog.  I was adamant that if we got a big dog, this dog would have to live outside.  I’m sure he must have thought I was crazy.  Hubby held his ground and said, if we got a dog he would live in the house. This called for an extensive research on breeds and I read up on many different breeds. Finally we settled on a standard poodle.  I liked the fact that standard poodles don’t shed and are known for their intelligence, but more importantly they are also known to live with children without aggression.
We fell in love with Bodhi (Bodhisattva) immediately.  He was a two-month fluffy ball of energy when we picked him up.

His energy just increased as he got older. In our area, I was known as the lady with the bouncing poodle.  He was so excited and loved to bounce up and down, sometimes backwards.

Bodhi has an amazing personality with powers to make the most apprehensive person feel safe with him. Everyone who met him, fell in love with him.  He was smart too. Once when he was younger, he took his stuff toy and placed it on our son’s bed.  Then he took Andrew’s teddy bear and placed it on his matt.  I would never imagine that he could think of exchanging toys with Andrew.  And of course, his “work” in the family is to make people feel happy, comfortable, and safe.  He does his job extremely well.

Which is why what he went through in December was difficult to watch.  On July 6, 2012 he turned 12.  Early in December I noticed Bodhi being unsteady on his feet and a weakness and slow movements navigating stairs.  I took him to our local vet.  He basically said he is getting old and this was expected in older dogs.  He sold me new food that is supposed to help.  Bodhi loved the new food. 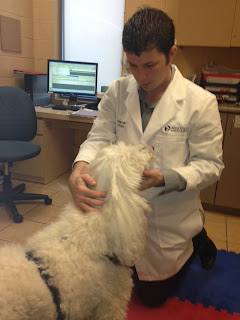 Then about two weeks later, after coming in from outside, Bodhi appeared unsteady on his feet again.  Then just as suddenly he had no control over his front limbs. Every time he tried to stand he fell back down. As you can imagine witnessing this was so scary.

Thankfully, both hubby and I were home at the time. Hubby was on a conference call with clients, and he immediately said, “Something is wrong with our dog. I got to go.”  We wasted no time taking him to the vet.  After an x-ray and blood test didn’t reveal anything, we decided to take him to the Animal Hospital for further test. After a battery of test, he was diagnosed with a compressed disc that was pinching his nerve and cut off blood to his front limbs. Evidently this is common in big dogs, and is sometimes called disc herniation.

We were so impressed with the Alta Vista Animal Hospital. Straight away he was assigned a neurologist.  Within a few hours, he had a MRI, surgery, and was in recovery.  Private Medicare at work for our four-legged patient got two thumbs up from us.  I am please to write that Bodhi is getting back to his old self and continues to get stronger daily.

This experience revealed that Bodhi is part of our family in the real sense, we feared for him.  As we took care of him in his recovery, it was clearer to me that he is connect to us on a very deep level and his life is just as precious to us as our own.  I now can relate to people who think of their pets as their “children”.  Indeed, the transition from “work” dog to integration into being a true family member surprised me as I experienced a rollercoaster of emotions with the prospect of losing him.  I know that when the time comes we will make whatever decision to be respectful and in honor of Bodhi.

He is and always will be our Bodhisattva!