It’s the last weekend in August and although summer doesn’t officially end for a few more weeks, this weekend always feels like summer is over. Like when you're almost at the end of a great book, you want to know what happens, but still would like the story to linger longer. I can feel the leaves changing, the north wind sneaking up, and fall just waiting to pounce at the first chance the sun is hidden behind the clouds. But I must remain present, in the now, so to speak.

Over the summer, I managed to learn new things about myself.
July 1st our 15 year old son embarked on an adventure at Laval University, in Quebec City, for five weeks of French immersion.  I knew that I’d miss him, and worried about how he would cope without us.  Particularly, since he would be immersed in a completely foreign language.  We stayed the night instead of driving back to Ottawa at a the hotel minutes from the university. I could not go to sleep until he sent me a text saying that he was in his dorm. I continued to wait for that last text of the day every night in July.
As the weeks went by and he seemed to be enjoying himself, I realized that letting him go this summer was the best thing for him.  I was proud of both of us, him for going without a fuss and me for following through and letting him go. It afforded him the opportunity to experience life separate from his parents.  Learning and meeting new situations directly and coming out at the end of the day surer of himself.
Almost immediately I was alone, I had to experience being by myself because hubby was away on business for the first week in July.  Learning to be comfortable being alone was strange.  Learning to accept that I could not control everything in my son’s life was even more difficult. That was biggest learning for me, letting go.  On August 2nd we picked him up. He looked taller, although somewhat thiner, but I could tell straight away  that he had matured.

In mid July, I received a text from one of my sisters who was experiencing a critical health issue.  I wrote about it here. An unexpected surprise was a brief visit with my lovely island girls, who delivered the wonderful life saving cold-pressed juices from The People's Juicery.
The lesson from this trip was experiencing how very essential being there for someone is to their healing. The saying, laughter heals, is so true. Seeing it transform and brighten my sister's eyes was wonderfully encouraging. I am so grateful to be able to spend that time with two of my sisters.  We took a day trip to Tofino, BC. I had a great time driving the narrow and twisting highway. I mean, I REALLY, enjoyed it, what a thrill. I only wished I had my own car instead of a rental.

Hubby suggested that since I was already out west, I ought to go back to Alberta with my sister Mary to visit with our mom in Fort McMurray.  I did, and I am so glad that I did. My mom is living in an extended care facility.

The most important thing I learnt about myself was that I have a bottomless cup of compassion where my mom is concerned. What a blessing to be able to visit with her. Living 2500 miles away makes it difficult to see her as often as I'd like. I don’t know what it is about an elderly parent, but they touch your soul with such pureness and wisdom.  And you feel that when they look at you, they SEE you. When you look into their eyes you can see all that was and all that is yet to be.  I have so much gratitude and love for my beautiful mama.

The balance of the summer is a beautiful blur, working, reading books, Weeding Playing in the garden, meditation, swimming, and basically enjoying the serenity that comes with feeling totally blessed.
Posted by ToBlog today at 3:11 PM 4 comments: 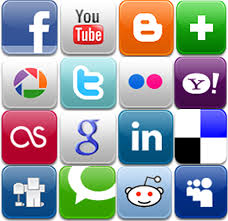 We all enjoy the privilege of posting and uploading whatever we like on a variety of social media sites.  Indeed, social networking is a 21st century passion for people the world over.  In fact, there is no shortage of ways to showcase our whims to the masses, be it by using Twitter, Facebook, Vine, Tumblr, Google+, Pinterest, and in blogs.   Technology created ways to keep in touch with families, friends, and like-minded people like never before. Within seconds, we can upload something for the world to see, comment, or share. All is good with our world as long as we’re connected.
But do we have any responsibility to our “readers” friends, and family?  Should we think ahead about what impact our posts might have on others?  Are we at all concerned about the message are we sending? Do we know what we post is a reflection of our integrity, values and beliefs?  And, more importantly, do you know what you post can stay on these sites even when you delete it?  Yes, it does, because you can bet that someone has it on his or her computer.

It is my belief that we behave on these sites as we do in “real life”.  So if we swear, use drugs and drink excessively, or act provocatively and immaturely outside of social media, it shows up there as well.  And so where's the harm, you might ask.  After all it’s just your life, right?

Some comments from Facebook;
My comment on this picture below was deleted shortly after I posted it.  But because it was on my computer, I am able to post it here, after I removed the names of the people. 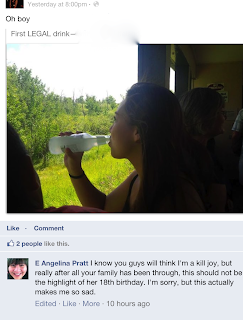 It was this picture posted recently that started me thinking that our behaviour as seen on social networks, will unequivocally impact others.  And is a direct reflection on character.  This picture posted by her parents, says it's okay to drink. And, finally it's legal! Never mind how the abuse of alcohol has impacted this particular family. I know this picture is supposed to be lighthearted but given their relationship with alcohol, it only gave me a heavy heart. It's like they gave up the fight, flung their arms in the air and said, she going to drink, so whatever.  And any impressionable young person on their friends, and friends of friends lists gets the message as clear as the picture.

That said, it appears that people still view social media sites as something that is private and personal like it's there own private journal.  You know these site were not built for the user, it's designed for commercial use. They make no money from you, so I ask you, who is their target? But that's a separate topic for another day.  Let’s be clear there is nothing private and personal if it’s on a social network site! By definition.

Awhile ago I re-posted this status update on my Facebook page, it is from a close friend after the loss of members in our community;

“The recent tragic losses in our community due to alcohol have been heavy on my heart. What can I as an individual do to raise awareness about the abuse of alcohol and drugs, which contributes to violence, accidents and even deaths?

Well, I've decided to embark on a campaign on Facebook by commenting on any of my friends and family's Facebook status that mention anything related to alcohol, drugs or violence from now on; this is to show our young people who are on Facebook that many of the comments made on Facebook about being drunk, going to parties, taking drugs and any kind of violent acts are not acceptable, not funny and often lead to disastrous outcomes. If I am deleted from your friends' list because of my anti-alcohol and drug comments, I'm okay with that.

I encourage you to join this campaign in the memory of our loved ones who we recently lost due to alcohol or drug abuse. You can start by POSTING this as your status update and begin commenting against alcohol, drugs and violence for a healthier community.”

These social network sites are rather new still and norms are being created as we transition to this new way of expressing ourselves. Having said that, we must be responsible for what we post because once it is released on the internet, it's a done deal.  And you never know, whose eyes are reading it and how that information will impact him or her.

Posted by ToBlog today at 3:58 PM No comments: