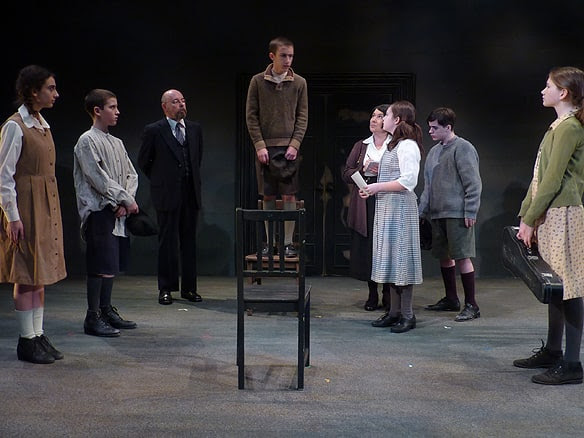 On November 14, 2009, we went to an amazing play dedicated to Dr. Janusz Korczak “The Children’s Republic.” This play is about an orphanage in Poland during the Second World War. Dr. Korczak was a dedicated doctor, who gave his life to look after the interest of children, and then he followed his young charges into the ghetto even though he could clearly have saved himself.

What impressed me were the young actors, who are children themselves and how they were able to transport back into a very dark era in our history. The picture above is the Children's Court. They were absolutely brilliant! The play was the vision of Leon Gluzman who lived in Dr. Korczk's orphanage. In this video he speaks eloquently about Dr. Korczk and his experience in the orphanage. Mr. Gluzman, 90 lives in Ottawa, Canada.

I wish I were aware of Dr Korczk and the orphanage when I visited Warsaw in the late eights as a student. It would have been interesting to visit the orphanage, which I believe is still standing. When we went to Auschwitz, I did not have the heart to actually tour the barracks because the enormity of what happened there overwhelmed me. I waited at the gate until the other students returned, all the while trying to wrap my mind around how humanity could allow this type of injustice to get as far as it did.

I'm glad you went to see the play on Janusz Korczak. Everyone should see and learn about the great, wonderful educator who did everything he could and even more for the children in the orphanage and in the Ghetto, during a period of atrocities .

My son Andrew was very moved by the play, and it provided a opportunity to discuss this horrible period in history. I agree, people should learn about and discuss what happened with their children.

It sounds like an amazing play. I would have waited with you at the gate at Auschwitz....

The play was fantastic, because the children were actually played by children it gave the play a very realistic feeling.

I would have really loved your company at the gate. I later found out that the hill I was sitting on was made from the ashes of the people who were killed. Although, I didn't go inside, I could not have been closer to what happened.