HE WAS A GOOD MAN 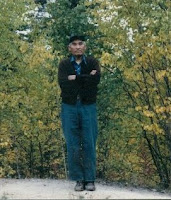 I still see him walking down Franklin Avenue in Fort McMurray, Alberta, as though it was yesterday. This image is etched in my mind. Imagery that stirs precise and real emotions within me. I see my dad, Baba, is what we called him. He was a warm, generous and a wise  man. He loved taking walks. (My brother Rossi walking down Franklin is the spitting image of him.)

He was a hunter and trapper. He didn't speak English, just Denesuline, our traditional language.

He was a man of medium build, his movements gave the impression of true strength and confidence. Head head  held high. His hair thick, cut very short and was snow white. His eyes, clear, dancing, thoughtful. Steady was his stride, not too fast and not too slow, with his hands firmly held behind his back he walked.

What might he be thinking as he is walking along in this city?

Might he be thinking, how the afternoon summer sun feels hot and the slight breeze feels soothing?

Might be he remembering, years earlier in another place in simpler times when he use to take some of his younger children to Holy Angels Residential school playground. Taking them there to play on the swings and to read at the priest's house in the summer?  You know, he had nineteen children, sixteen surviving. He had ten sons and six daughters, and grandchildren who he raised along with his own.

Might he be thinking how easy it was to make his children happy by just taking them for a walk on the dusty gravel road in Fort Chipewyan, Alberta. (Dohead) In those days very few if any cars whizzing by, but he could hear in the distance the trotting of hoofbeats that he knew belonged to Leo the waterman’s horses. Perhaps if it were a Monday he might have heard the PWA jet overhead. Might he be thinking, how as he walked silently, his children softly murmuring and laughing amongst themselves that his life just could not get anymore perfect.

While he enjoyed the warmth of the sun, feeling the cool afternoon breeze, what might he be thinking?

Might he be thinking of a time and place where his spirit was truly free.  (Luezan Tué) where the birds  singing and wildlife are so near you can hear them in the bushes?  Perhaps he was thinking about how clear the water is that you can see the huge fish swimming in lake? Where he could hear the sound of waves gently rolling in and see the forming of small indentations on the perfectly white and beautiful sand dunes , which was as inviting as any sandy beaches of distant lands. In the distance the sound of the loons, which provides him useful information about the activity around the lake. The sky a bright blue and peppered with cumulus clouds.

Is he remembering sitting by an open fire, enjoying fresh brewed tea and freshly made bannock, as he listened to stories told by his old friend Doc Holiday? Is he recalling that he too told some of his own stories, surely his were more outrageous, and yes he knows they were.  Indeed, he was a great storyteller. He was also a very cultural man who lived in harmony with nature. He never gossip or said a bad word about anyone.

What might he be thinking while he walked in the hot summer heat?

Perhaps, about the perfect little log house he built out of nearby trees for his family in Doghead.   And how when he entered the porch, he had to struggle with the many pelts hanging overhead drying. Those days before the BC Bennett Dam diminished the water line and emptied the marshes, when trapping provided a generous bounty.

As soon as he entered warm air from the wood stove hits his face and the smell of cooking stirred up the hunger he had been suppressing.  Someone would shout: “Close the door!” and he wrangled with all the shoes and boots in his way but he finally gets the door shut. He looked for a place to put the results from a successful trip to the trapline. You know, he was a good trapper and provided well for all this children and often also had enough to share with the community.  Might he have been thinking how good it felt being in the warmth and security of  home with his wife and family after days out on the cold trapline? Could life be more perfect!

“Town bound”, he would say.

What might he be thinking, as he walked down Franklin Avenue that hot summer afternoon?

Had be been thinking of how things are changing so quickly? Changes that he knew were coming, but yet, worried that they may not all be good. Was he thinking about the future for his children, grandchildren and great-grandchildren?  Was he thinking, if there was one thing he could teach them would be that they should strive to be happy, kind, educated, and good strong Dene? Perhaps most of all to accept the simple things in life, like being completely content knowing that you've done your very best.


But if truth be told, I believe he was walking in silent meditation being one with the environment, being present. To know him, is to know that he was an integral part of nature and was the happiest when in his element.  His element was anywhere he was at the moment. He was at home anywhere. A man who was a strong silent type. A man of few words. Ironically, when you caught him in the mood for storytelling, you better be prepared to sit and stay awhile.

What a beautiful, poignant tribute to an amazing man. And I'm sure he's smiling, knowing that he's provided you with such heartfelt, lovely memories of your childhood! Thanks for sharing a glimpse into your dad. He sounds like a wonderful man.

Thank you Kathryn. Interesting how no matter how much time has passed, it seems to stand still when a parent dies. <3