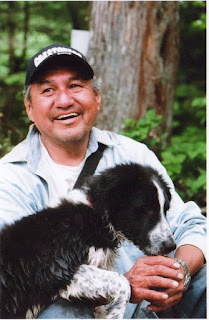 I still see him in my mind's eye a strong confident man. Interestingly, my mind goes back to our house in Fort Chip when I was a child. It is a sunny afternoon. Our house feels warm light and full of happiness. I remember one Christmas, he received a guitar, and taught himself to play.


My last few conversations with him were wonderful, tender, and caring. The last thing he said to me was: “You are so compassionate little sis; I know you really care for our family.” He was right. He saw my commitment to family.


I am really conflicted about his passing. On one hand, I know he is no longer suffering. In his later years he was not very healthy. Physically he had difficulty with his respiratory system, and mentally and emotionally he was in a struggling relationship. And through it all he remained true to his nature.

However, I still feel the pain of his passing. And I am happy he was in a peaceful and safe place before his death.


Days before his passing he was content. In text messages he stated that where he was living is peaceful. He was focusing on his recovery and gathering and picking up his scattered authentic self, his identity, and his self-worth.  I believe none of his siblings knew how much assistance he needed day to day.   he was a proud man, and gave everyone the impression he was doing better than he was.


He wrote to me: “I look forward to eventually independent living with a place of my own. I am single now.” He added: “Good thoughts go a long way. You love unconditionally, keep it up.”


It is satisfying to think that his last weeks were with people he felt were good people: “I am with people who have a lot of compassion and unconditional love. I am very positive and hopeful dreaming many possible things to do for the future.”


If things were different, he would still have many good years ahead. But it is not so.

He impacted many people with his positive energy, and his solemn advice, his laughter and good humour.


He was a man who could identify with “bush” life, but while he also tried to walk in the white man's world, it was conflicting for him. He questioned whether he was worthy or if he measured up. This  doubt  and lack of confidence was generated in residential school. He was more than that, he was Dene. It is an amazing acknowledgement to be able to speak your language, to identify with nature and animals. He was a very special and thoughtful man.


Towards the end of his life he reconciled those feelings knowing that he was special to be born an Indigenous person. He felt that his life had meaning and purpose, and he used those teachings for others who were struggling with their own worth. Residential schools caused many strong Indigenous people to question their worth and their significance as Indigenous people.


I am glad he was able to see his own worth before he passed.
Posted by ToBlog today at 12:54 PM

A beautiful tribute to your brother Angelina. Thankyou for sharing. <3