A distraction, and a stubbed Toe 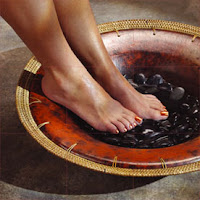 I am being totally present, paying attention, being in the moment, each moment...

I am talking on the phone, giving my full attention to the conversation. Then the TV which was paused, turns on and startles me. I quickly reach for the remote in the dark while still talking on the phone, in the process I stubbed my big toe. What a rude awakening! I tell you, I was rapidly in the moment with the pain for sure, yikes!

It takes less than a split second of a distraction to create an accident. fortunately, for me, it was minor and my toe is healing. But really how many times have we taken our attention away from the present which resulted in an accident. I have to remember cause and effect, if you're not present (cause), you may have an accident (effect)...
Posted by ToBlog today at 8:53 AM No comments:

In the summer time when winter is but a cold memory, we enjoy the fabulous lazy, hazy, summer days! 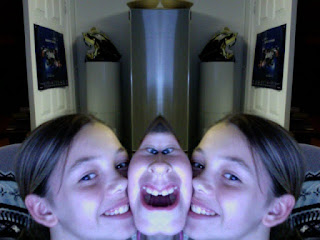 Family and friends visiting is for me, the best part of summer! The first few days are spent reconnecting by catching up on stories from our time apart. The feelings of familiarity is there, yet, there exist an unfamiliarity as we catch up on personal stories. People are influx and ever changing, even in the most minute ways. Children on the other hand, change daily, maybe even every second but it is more noticeable to notice when you don't see them for a few months. But under the changes they remain the same lovable people. A flurry of activity, afraid to to miss the summer extravaganza, fairs, festivals, and the like. However, the treasures are those sweet moments when you're doing nothing but hanging with one another. Souvenirs of the best kind, I say.

Posted by ToBlog today at 3:31 PM No comments: 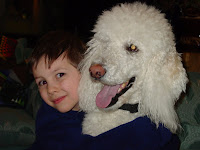 I realized something about myself this past week, which is, under my calm demeanor I can be very emotional. It is easy to maintain a calm disposition when thing are going smoothly, the test is, how do you behave when the unexpected occurs?

Last week, our dog of eight years, Bodhi, ran away for the third time since July 1. We have never worried about him leaving our country property on his own, so he is free to roam. But for some reason this summer, he developed a fear of storms. Unfortunately, this summer we have had an unusual amount storms, almost everyday there is a brief period of thunder and lightening.

It was a nice sunny day, then a storm sweep across the river in moments, he must have been terrified. Somehow he got out. I remember driving home as the storm came through the area, thinking, I hope my husband had brought him in the house.

I called for Bodhi as soon as I opened the door, searched the house and backyard, he was nowhere to be found. I was very upset and worried about his safety, he does not have experience with traffic. We searched the whole area, taking posters to be hung at various locals, we even went downtown to file a missing dog report at he SPCA.

My emotions went from anger, to worry, to sorrow, to acceptance. I tried to meditate but could not focus, so, I sat with my singing bowl. I held the bowl and listened to the music and felt the vibrations until it slowly calmed my spirit. 24 hours later, all I was hoping for was that if anyone kept him that they would treat him well. He is a very good matured dog.

As I was preparing for bed that night, checking all the lights and doors my eyes glimpsed a profile of a dog standing at the front door. I opened the door to find Bodhi standing there. He came home, but is silent on his adventure!

Posted by ToBlog today at 7:37 AM No comments: 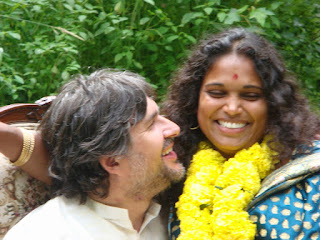 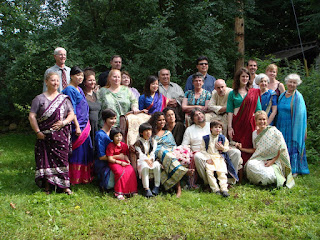 Last weekend, July 27, 2008, we went to Larry and Bobbie's wedding. The wedding took place on his bride's family farm outside of Ottawa. 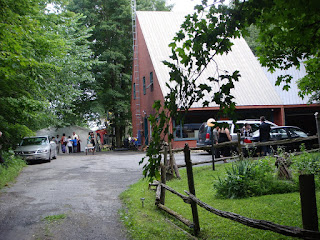 This was not a traditional wedding . It was a special wedding on many levels, two cultures joining, Hindi and Metis, two families joining, and two friends joining together to make one family in a tent smelling of incense. 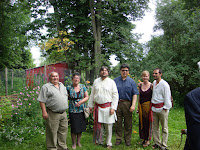 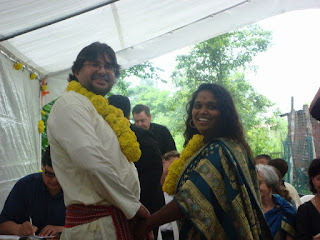 The morning started with intermittent rain and thunder clouds and I wondered if the bride and groom had made accommodations for inclement weather. But when we arrived it was sunny, although it still looked precarious.

It began to rain as the bride entered the tent, and during the ceremony the rain came belting down on the the roof of the tent drowning out the vows. Shortly after the vows ended, so did the rain and the sun shone graciously on the couple and their quest.

The actual ceremony was an adaptation of traditional Hindu and Metis wedding traditions. The Hindu part was a much shorter version of the traditional Hindu wedding ceremony. The tent filled with ruckus of bells, drumming, conch shells being blown, and ladies ululating (yodelling). This music created an atmosphere of celebration, and with the participation of nature with thunder and rain dancing on the tent roof it really was electrifying . 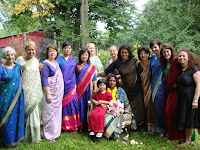 The Metis portion was a blessing from Peter Decontie. an Algonquin Elder, with the burning of smudge. 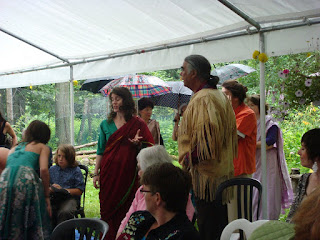 We gathered under the tent listening to Metis fiddle music while we feasted on traditional First Nations food. The sun came out and allowed the entire party to spread out to enjoy the beautiful garden and share in the special moment for Bobbie and Larry and their families. Merriment and laughter burst out of the tent and into the night. 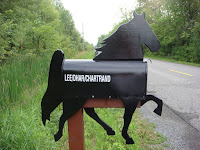 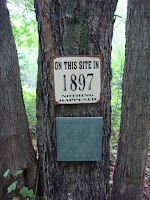 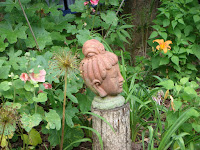 Posted by ToBlog today at 8:57 AM No comments: