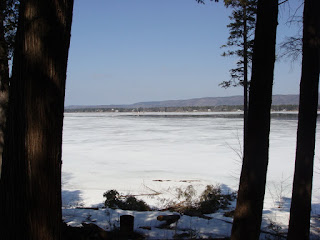 Saturday, March 28, 2009
Finally, the ice is beginning to break up in the center of the Ottawa River!
Posted by ToBlog today at 9:02 PM No comments:

I appreciate impromptu conversations that stir and swirl in my mind long after the conversation has died. Yesterday, my friend came over and we had the most interesting conversation about femininity and sexuality.

She, being the only girl in her family, was somewhat of a tomboy and her mother, for reasons of her own, did not allow her to indulge in pretty girly things. Moreover, she will be the first to admit that how she was raised she has given her some distorted ideas regarding sexuality.

We began talking about regular stuff, such as her job, her husband’s work, their plans for a new house, and children etc. Our conversations are never anchored and flow like a stream of consciousness. This time we end up in a dark alley talking about strip and fetish clubs.

She mentioned casually that they recently went to a fetish club. What! She got my attention and intrigued my curiosity. She began by describing the interesting attire of the members of the club in detail, animating with arching swings of her arms. As a spectator I'm sure it was fun. I asked her what she wore. "Hmmm," she said, "I have these fantastic high-heeled red leather boots that come up to the thigh, short skirt and a t-shirt." No, she does not do the plunging neckline thing. But still...

I asked if it made her feel sexy, but she said no. She said: "It’s more like dress up, playing in costume." In a way it helps push her out of her comfort zone by being in an environment most of us would not even consider stepping into. Fortunately, she can carry it off.

She precisely what one would call a paradox in more than one way. She wears short, short, skirts but says it is not for the attention. A man asked her once: "What do you mean you’re not sexy?Look at how short you wear your skirt."

She replied, "I never wear a short shirt and high heels at the same time. I wear flat shoes so I can run fast. A short skirt because of the freedom it allows me if I want to make a mad dash somewhere. It's a comfort thing." she insists.

Do men and women think differently about what they consider sexy? "Of course they do," she contends. For example she said: "All you have to do is look at the strip scene. Men find visual stimuli exciting where as woman need to an emotional connection. A male stripper once told her that he had to do more than just dance for his audience. If he wanted more tips he had to engage the woman spectators on a different level."

"Women," she continued, "need an emotional connection. They are auditory and men are visual, and some women are both. By and large women need more than eye candy to be fulfilled."

What made this so hilarious is the way she describes getting dressed up and going to these clubs. On one hand she is (in her mind) ultra conservative, but in reality she is pushing the envelope. This is a person who finds it difficult to put on makeup, especially lipstick, because in her mind it sends the wrong message. I asked: "Is being feminine something you would regard as sexy?" She said: "No. Sexy is no makeup, not made-up to be someone different for someone." So, you might ask why does she do this? Guess.

My thoughts on this are that it should be her choice to explore who she is, or not. I just like the stories, because that is one scene you won't find me. I'm just saying.

Posted by ToBlog today at 4:28 PM No comments:

How one makes their tea is based on personal choice. Over sixty years of making the perfect cup for optimal taste has not changed much. George Orwell: A Cup of Tea written in 1946.
Posted by ToBlog today at 10:31 AM No comments:

I love Lily! Sometimes a song is just a song - to be enjoyed.

Posted by ToBlog today at 7:46 PM No comments: