Book Review – Firewater: How Alcohol is killing my People (And Yours), Harold R Johnson

Harold Johnson, a self-declared, former drunk Indian, is the author of this book. In spite of his struggles with alcohol he achieved a standard of notable worthiness, as a lawyer and writer, a Harvard educated one at that. 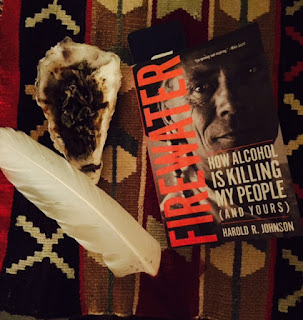 Firewater is a very insightful and entertaining book.  I highly recommend EVERYONE read it, whether you drink alcohol or not, whether you’re Indigenous or not. Read it all the way to the end!  There are nuggets of wisdom in this book for everyone! Yes, this has been the subject of books before but I promise you Johnson brings a fresh perspective to this topic.

For example he writes that Treaty No. 6 signed in 1876 included a provision to disallow intoxicating liquor to be introduced or sold to the Indians.  I don’t know how many times over the years I’ve read that particular Treaty and yet I never paid attention to that section. It appears that Treaty No. 6 was breached as soon as it was signed, and nobody noticed!  I was also surprised to learn that The Royal Commission of Aboriginal Peoples Report (RCAP) 1996 only dedicated less than 8 pages to the subject of alcoholism.  Their report was 4,000 pages long!  Clearly they didn’t want to look too closely at this topic.
Johnson writes that first and foremost a call for ACTION…begins with an honest conversation about alcohol. He is not talking about addictions - he is talking about alcohol.  Hence, the book’s title Firewater.  I imagine some of you might be thinking but they are the same thing, right?  No, Johnson makes a clear distinction that they are not.

He doesn’t beat around the bush either, but instead addresses his topic directly with such intensity that it can’t be ignored. The stories he describes in his book are tough, brutal, and powerfully illustrated. The stories will touch you deeply and make you cry (at least they made me cry). He states unequivocally, “None of this is easy to write, to speak of. We want to hide it away.”  Indeed, many of us continue to turn a blind eye to this problem as we watch our relatives being led to jail or tearfully bury others whose lives end up in a too early and tragic death.
He also draws a convincing correlation between alcohol and its financial impact on society. I am sure you’ve heard statistics regarding alcohol and the impact it has on Indigenous people. But Johnson shocks you with statistics. He states that alcohol not only impacts the individual, but its impact is far more reaching than we have considered.

Furthermore, he skillfully steers the reader through a logical sequence of traditional storytelling, which allows for the possibility of creating a new story about alcohol.  About changing the ‘drunken Indian’ story… a story that is killing us. He writes, “We can think about those of us who walk in a sober way, people who create their own paths and have freed their minds from the alcohol story.” He goes further and makes strong recommendations on moving forward for the communities and the individual on how to change this story.

Community leaders, grandparents and parents, aunts and uncles, brothers and sisters, the conversation on alcohol has shifted.  It is not the same recycled ‘drunken Indian story’ – but a different one - one which will serve us properly.
Posted by ToBlog today at 7:32 PM No comments:

This is what happened to me in a 24 hour period!

I helped a friend look for her adult son. They were visiting and it was his first time to Ottawa.  He went downtown to do some shopping.  He said he would call her when he was done.  She waited for his call all evening.  No call.  She knew, she knew --- that he must have given into his addiction.  He had been sober for 15 days. On his facebook that morning he wrote… “Chillin in Ottawa!  15 days sober, doing great. Going shopping!”

I offered to take her downtown to the men’s shelters to look for him.  We drove down the streets. Her eyes scanned the faces, carefully, looking, searching.  Searching for a glimpse of him.  She was worried, quietly, deep in thought.

As we approached an area with street people hanging about, she said, this would be the place where he would be. She pointed in the direction of street people beside a grocery store.  I slowed and asked her, is he there?  She looked again, and yelled, there he is!

Her son was on the ground beside the curb. He was unconscious.

People walked by not even looking at him. There were 3 street people sitting on curb beside him.
They stood up as we approached.  I immediately went to his side; I checked for a pulse, it was strong.  I looked at him carefully, studying his breathing, checking his face.

She started talking to the street people, one man and two young girls.  He was Cree from James Bay, Quebec. He was maybe in his early thirties.  The shortest girl, maybe in her twenties said she was from Iqaluit, Nunavut. She reminded me of an another Inuit artist whose body was found in the river earlier that week just a couple of blocks away.  And the other girl, also in her twenties, was from Peru.

One of the girls said, we are watching over him.  He is ok.  But clearly, he was not ok.  My friend asked questions, how long had he been there?  What was he drinking? Were they with him long?  The girls kept looking down at him on the ground.  He is ok she kept saying.  He was not unconscious for too long, maybe an hour, he said.  She said, he fell and hit his head. The man said, he had been robbed of his phone, cash and Id.

What I realize is that these street people who just met him the day before were concerned about him and they watched over him the best they could.  They kept looking at him, checking to make sure he was ok. They reassured the mom that nothing bad would happen to him. Not being aware that something bad had already happened to him because this, what was happening, was normal to them. For anyone else, an unconscious man lying on the street for over an hour would not be perceived as normal.

As the mother was asking the young people questions, her son said, mom! I am ok. All I could think was on some level when he heard her voice, he felt comforted by the sound of her voice.  And maybe thought, my mom is here and I am going to be ok.
The mother tried to get her son up off the ground to walk to the car but he was unresponsive.  She said to the street people.  Maybe, I should just let him sleep whatever is in his system off.  I will come back in an hour.  The three said, don’t worry about him.  We will watch him.

We returned over an hour later, but he was no longer there and neither were the street people.  My friend decided to go into the store to get something to drink.  She bumped into the man we met earlier.  He said, we waited for you to come back.  But the ambulance took your son to the Shepherds of Good Hope triage; they will take care of him there.
He gave her directions and we went directly there.  When she got there, she was told he was sleeping. They assured her they were monitoring him.  She left her number in the event he woke up and needed a ride.  Again, she waited for a call from him that didn’t come.

The next morning I said I would go with her to pick him up.  I could see the worry on her face, I know she was thinking, what if he was not there.  I could see her relief when she was told he was still there sleeping.   He was unstable and somewhat incoherent but able to walk to the car on his own accord.  By this time, he had not had any alcohol in his system for over 24 hours.

We had breakfast, but he didn't come in, instead choosing to stay in the car. She decided they should just head back home, I watched as she drove away--- the fact that he was still so out of it concerned me.
I realized two things

I am excited for what the year ahead holds for my son, Andrew.  He begins the next phase of his life as a university student at Acadia University in Nova Scotia.  He is embarking on a Bachelor of Arts degree in political science and he is living in residence.

Last year we decided to defer sending him to university for a year and I think this was the best decision for him. He spent the year taking critical writing and physics courses. He even got his drivers license, I think it was time well spent.

I can see already, that he is much more mature and self-assured than he was last fall. I am confident that he will be able to navigate through the next year with less trepidation and more confidence. For sure, he was plenty nervous the day we dropped him off at his residence, as were all the other freshmen students.  He said, could you just take me back home with you?  I told him every experience he had leading up to this day was to prepare him for university.  During his high school years we enrolled him in summer courses at various universities across Canada.

Laval University was five long weeks of intensive French immersion, which he survived.  Quest University, located in picturesque British Columbia was four weeks in the study of music and writing, which involved outdoor excursions to take advantage of the scenic environment.  He really enjoyed his time there.  University of Toronto, right dab in the middle of the city provided him with an opportunity to see what it would be like to study law when he completed the Aboriginal Youth Summer Program at the faculty of Law.  Something he is thinking of pursuing after undergrad.

All these experiences provided him with leadership, spiritual and emotional growth.Still, it was not easy leaving him. He promises me a blog on his first week impressions of university life, which I will post here.

We drove to Nova Scotia, it took us two days!
I was a sad mama, leaving him behind for the long drive back home.  L Thankfully texting keeps us in contact on a daily basis.  As he becomes more comfortable at university, I know his texting will become less frequent. But at the moment I am enjoying this new way of communicating with him and I am excited for the amazing possibilities and growth that university will afford him.

Andrew will be back for Thanksgiving and I can’t wait.