"Dance Me To The End of Love" Leonard Cohen 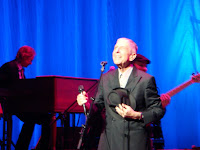 He came out skipping onto the stage and into our hearts. I mean, literally skipping, like a child at the playground. If you were sitting close enough (we were), you could see the glint of mischief in his eyes. "Dance Me to the End of Love" was his first song of the evening, and we all followed him to the end... 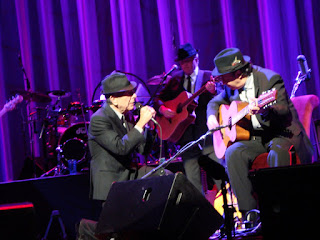 May 26, 2009, at the National Arts Centre in Ottawa, Leonard Cohen, poet, singer, and former Buddhist monk gave a most spectacular three hour concert to an enthusiast crowd. Clearly, the fans adore him. From the minute he skipped onto the stage he owned the crowd. They sprang unto their feet giving him his first of many standing ovations of the night. And the fans were not shy about showering him with adulation, sprinkling the brief periods of silence between numbers with "I love you, Leonard!" He responded, "I love you, too!"

Everything about his performance was designed to entertain, and he did not disappoint. I especially loved his fedora hat, which throughout the evening he removed to give respect to the fans and his band. His band included Javier Mas on bandurria and laud, Dino Soldo on winds, guitarist Bob Metzger, Rafael Gayol on drums, Neil Larson on keyboards, bassist Roscoe Beck and, a long-time collaborator Sharon Robinson and the Webb Sisters - 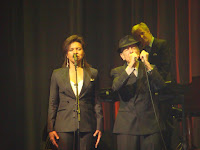 introducing them as his singing “angels”.

I am a relatively new fan compared to some of the fans who attended the concert. I spoke to a lady who followed the tour and saw 24 concerts so far all over Europe and Canada. She has tickets to see his 75th birthday show in Spain this fall. She confided that her husband understood that he came second to Leonard as she confessed that she has been 'in love' with him (Leonard) for forty years. Now that is a fan! He ended, with Closing Time, though no one wanted it to end.

My husband, Alan, loves Leonard too. How much, well he would have to tell you himself.

In about 1966 I saw a clip from a documentary showing him singing and playing guitar at a party. I am not sure, but it might have been the Stranger Song that he was singing. In 1967 his first album came out. He had already been made famous as a songwriter when his song Suzanne became a hit by one Noel Harrison. "Who?" you might ask. He was the son of Rex Harrison of My Fair Lady and Dr. Doolittle. Suzanne was probably his only hit.

The first Leonard Cohen album was a revelation to my 16 year old ears. Sophisticated, worldly, funny in places, his rather dull singing voice giving his words all the room they needed to sparkle. He sang about love, saying goodbye, strangers, sisters of mercy. The back cover of his album had a picture of Joan of Arc engulfed in flames. It was like nothing else I had heard. The arrangements were spare, with backing female vocals that became one of his sonic trademarks. I taught myself the rudiments of fingerpicking from his guitar playing.

The second album came along, "Songs from a Room." Not quite as good, but still very good with songs like Bird on the Wire (likely the only Cohen song I have ever been made sick of through overexposure, although Hallelujah is getting there) and The Partisan. Then "Songs of Love and Hate," containing some of my favorites, like The Avalanche and Famous Blue Raincoat.

After that, Leonard and I parted ways for a while. In fact it was not until First We Take Manhattan that he came back on my personal radar. By the time of The Future in the early 1990s he became again as important to me as he was in my teens. Now he was even more worldly, and his humour even more prominent, especially in songs like Democracy: "Democracy is coming to the U.S.A."

Since then I have avidly listened to everything he puts out, and as he ages his lyrics are somehow simpler, less overtly literary but deeper, more heartfelt and somehow closer to my heart as I too get older. He has modernized his sound through collaborations with musicians like Sharon Robinson, but those female voices are always there in the mix, a crowd of angels that follow him through his career as a singer. He remains utterly relevant, his musical and lyrical output a gift to the rest of us.

I am sure that if he had not been defrauded of his life savings he would not be on his current non-stop worldwide tour. He would perhaps have gone back to his mountain in California to practice Zen or gone home to Montreal to enjoy his old age. Instead he has been forced to put together a stage show, and what a show it is! He would never had experienced the outpouring of love that showers him every night on stage, and might never have known how much he has meant to so many.

As for me, seeing Leonard Cohen live was to see a great personal hero. It was to hear from the master's lips the sardonic, witty, deep words that he has set to music. It was to see him interact with his musical collaborators, mostly much, much younger than him, and it was to see a man seemingly surprised at his own skill on the stage. I wanted to yell out all that I was feeling as I watched the 74-year-old version of my teenage hero perform his songs, old and new. I clapped until my hands were sore.

He might have been forced into touring because of financial pressures, but onstage he is generous, humble and lovable. He is a master not only of writing but of living.

I would not have missed it for the world.

Posted by ToBlog today at 4:57 PM No comments: 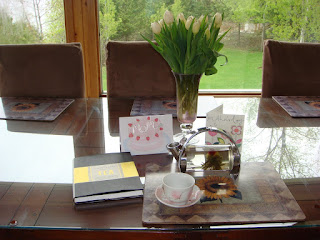 a cool tea pot, this one is called sorapot, which I received for Mother's Day.

I am one blessed mom!
Posted by ToBlog today at 6:53 AM No comments: 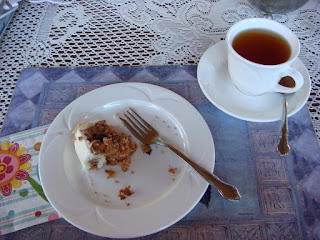 Tasty fragments of life provides pleasurable moments. String them together to create a memorable day. Collect as many as you wish.
Posted by ToBlog today at 4:07 PM No comments: