We all process terror and horror differently, what is scary to some, is just plain ridicules to others. Our reaction to what scares us I believe is deeply rooted in our psyche. Case in point, Horns, which I just read by Joe Hill and I kid you not, this was the most terrifying book that I’ve read. Initially I started reading it but quit after chapter one because I thought the premise of the story was pretty stupid.

However, I just could not get the main character, Iggy Parrish, out of my mind. He had taken root in the deep dark area of my brain and the only way to get rid of him I thought was to exorcise him by following him to the end. So I grabbed the book and finished reading it. I admit, there were still some sections of the story I could not get myself to read and glanced over them quickly before moving on to the next scene. By now you probably think I am some kind of wimp. It is just a story after all.

I think being raised Catholic has something to do with how I related to Iggy waking up as the devil. As a child, the devil was around every corner tempting anyone in his vicinity. There exist a struggle between what is right and wrong and in a perfect world the devil would always lose. But what if...

...the scariest thing imaginable happen, waking up as the devil like Iggy. Scarier still is how the other characters reacted to him. I don’t know but for me taking the reader to the darkest depths of unspeakable impiety is more terrifying than say invasions of aliens or vampires.

Regardless, I totally recommend reading this book, Joe Hill is a talented writer. Which is no surprise, after all he did learn from the most prolific of horror writers, his dad.

Another blogger reviewed the book here and the another review here. 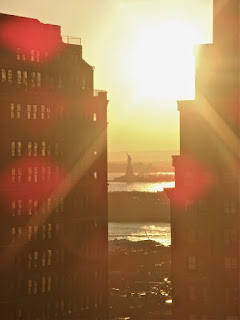 I am not sure why it took so long for us to visit this amazing city, but it took over 15 years after living practically next door to finally go there. Although, I admit, I was aware that it is an incredible metropolis with a worldwide reputation for some of the most exciting entertainment venues and museums but somehow it always felt too far away. Really, it is no more than a seven-hour drive.

Going to NYC for Spring break was a spontaneous decision. After our son Andrew returned from NYC with his grade 7/8 class he suggested we go there the following week. After a brief discussion, we agreed to go and as it turned out was the best decision we made collectively as a family. 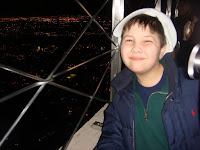 He was our tour guide and we spent the next three days following in the footsteps of his class, minus going to the UN. However, we added more tourist activities which he didn’t have time to do with his class on his previous trip. Here he is at the Empire State Building!

My first impressions of NYC was that it is clean, energetic, and friendly. I’m not sure if it was because it was one of the first hot, sunny days, but New Yorkers as whole are a pretty friendly bunch. We were there right smack in the middle of it all for St. Patrick's Day Parade. There were millions of crazy, happy, fun lovin people on the streets!

The only criticism I have is where are the public toilets! Fortunately, we found Starbucks had one but others found it too. The line up was about 45 minutes because it was St. Paddy's day and tons of people where in the same predicament.

All in all, it was a very memorable trip, the highlight of which for me was seeing Lend Me A Tenor, which was playing at the Music Box. After the play we went to the Empire State Building, by then after midnight, to see the city lights. It felt very ‘sleepless in Seattle’. Magnificent!

The following are some images (click to enlarge) of the trip… 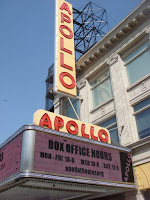 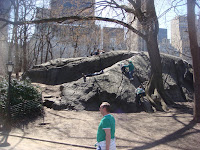 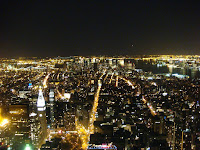 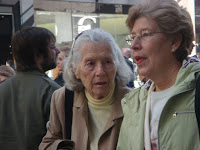 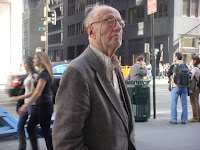 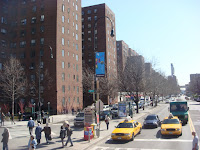 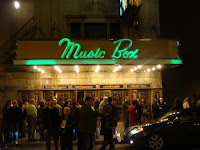 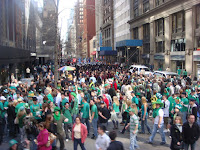 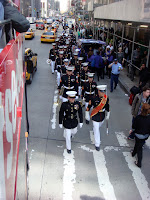 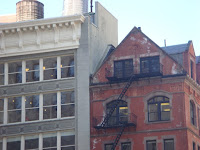 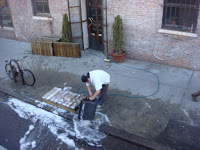 I am on day eight of the green smoothie challenge and so far I am doing great. A real bonus to this challenge is that each day I get an email with the smoothie for the day. Along with the daily recipe includes a short note about its benefits, which acts both as a reminder and a motivator. Finally, the price is right, because it is free!

Although, I think the title 'green smoothie' is not that appetizing and might turn some people off, but you wait. Once you've had a glass I'm almost certain you'll want more... Just because it is healthy it does not need to taste bad.

In just this brief amount of time I already feel the effect of the drinks, in that I have more energy and clarity… and as I mentioned above it is actually quite delicious.

My favorite green smoothie so far is:
4/5 kale leaves,
3 apples,
½ lemon and
2 cups of water

Before I put it to my lips I gaze at the color of the liquid in the glass. It is bright, frothy, and very green, a colorful feast to my eyes to be sure. I bring it close to my nose and smell its lemony freshness and then drink this delicious elixir slowly to let my taste buds giggle delightfully. I just knew it would taste great!

I decided to look at where my food comes from started after I saw this video. Honestly, after seeing this film there is no avoiding or ignoring what goes into this body anymore. Maybe sometimes it is good to be ignorant but this is not one of them.

I'm looking forward to planting my garden and reaping even more benefits and it is comforting knowing exactly what I'm feeding my family from now on. It feels great to be in control.

I've completed the 14 day challenge!!! Yay for me! It is not as difficult as it seems to change one item in ones diet and the benefits are tremendous, more energy, healthy skin, and hair. Who doesn't need clarity of mind? For all those reasons and more is why a 'green smoothie' a day is how I'll be starting each day from now on. Can you tell I just LOVE it. Thank you Anand and Runi you changed not only my life but the life of the people in my house! I challenge everyone to try this for life's sake.
Posted by ToBlog today at 3:46 PM No comments: