On the Brighter Side


The fluffiest, biggest snowflakes descended slowly, seemly hovering before carpeting the ground with its freshness. Moments later, darkness as the flurries began in earnest together with crazy wild winds that swirled, picking up the freshly fallen snow and scattering it around the parking lot reducing visibility near zero. This was followed a few minutes later by a burst of sunshine as though the powers of being decided this was too theatrical reducing the moment to calm and brightness. Such was the weather fluctuation over a two-hour period while I waited in line with about 55 people at Henry’s for a chance at getting a $500 gift certificate.

When I arrived there was not a soul to be seen and after waiting about twenty minutes I thought perhaps I’d made a mistake and it was all in my head that Henry’s was giving away gift certificates today. For the first forty minutes I stayed in my car, cozy warm like, drinking my tea and playing on my ipad. Then a couple people arrived, lawn chairs in hand. There were four people in line when the guy in the car next to mine got out and joined them. I thought I better get my butt in gear even though we still had over an hour before the doors would open. And just as quickly everyone sitting in the comfort of cars had the same idea, and reluctantly joined the growing line.

The people in line were very chatty; I guess being cold will do that to you or maybe they had one too many coffees. An older lady first in line was a pro I could see that straight away. She was bundled up from head to toe, sitting in her lawn chair, a hot thermos of coffee at the ready, accompanied by her friend. They both looked like they were settling down for the long haul as thoughts of winning occupied their mind, I’m sure. She said last time she got $500 and has gone to at least three of these events!

A guy beside me said he was in this store for the first time yesterday, and was told to come back this morning for a chance to win. He was shopping for a camera for his teenage son who was enrolled in a high school photography class. Still yet another young man said he had nothing better to do this morning so thought what the heck. Some other guy mentioned his wife ordered him to come down and he knew better than to cross her. Most of the people in my group of ten had participated previously for the chance to win either a gift certificate or one of those midnight crazy events and all were pretty hopeful to come away with something.

A staff person came out to tell us what to expect a couple of minutes before the door was to open. Only ten people at a time in the store, each would get an envelope that had a gift certificate valued between $10 - $500. “You must use it today because it is only valid for today.” she stressed.

Our group was first to be ushered in and we each got our envelope. Funny, now that we were ‘good friends’ we peeked into each other’s envelope seeing what the other got. Alas, lady luck was not smiling upon us this day and no one in our group got the coveted $500. The lady who last year received a $500 gift certificate and her friend each received $10. She said, “that’s okay, that’s okay.” The man that was shopping for his son got $25, but his wife was at the back of the line so they had another opportunity for the $500. The guy who had nothing better to do today, got $50 and mine was $25. Sweet!

Was it worth it? Yeah. I’d do it again. At any rate, I was planning on buying a camera lens for hubby and this morning I got $25 off my purchase. Not to mention, it gives me something interesting to blog about.
Posted by ToBlog today at 6:43 AM 2 comments:

How Come This Never Happens to Me 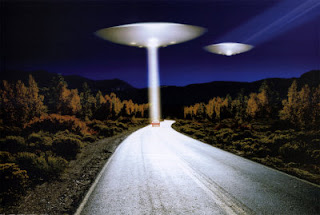 Saturday mornings I enjoy reading  the West Carlton Review, our local paper.  Specifically, I can't wait to read the “Ottawa Police Service” section, which is my favorite. I don’t know how to explain it… but it is just plain hilarious!  How about you judge for yourself.
UFO Sighting in Corkery (You don’t see this heading often!)
There was a UFO sighting in West Carlton.  Shortly before 6 p.m. on November 10, a 911 caller reported seeing a UFO take up a hovering position somewhere between March and Vaughn Side Roads.  The Object was hovering at an approximate altitude of 3,000 metres and a very bright cone of light descended from the object to the surface of the Earth.

Certain that the UFO wasn’t an airplane, the complainant advised the 911 operator that the UFO briefly dropped down to the surface before returning to its previous hovering station.  Air Traffic controllers in Ottawa claimed they weren’t tracking UFOs or airplanes on radar over the West Carlton area during that time period.

Police reports concluded the UFO was the result of a film crew using a crane-operated light in and around the Hollywood district of Ashton Village.  (or was it?)
Posted by ToBlog today at 8:47 AM 1 comment: 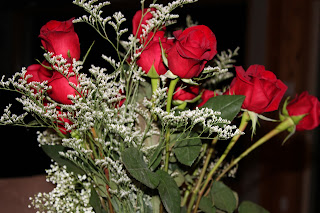 Each anniversary we take the whole day off from our busy schedule to spend together.  I can't think of a better way to spend my day.
Posted by ToBlog today at 6:40 AM 8 comments: Yesterday, my IT person took my Mac away because it refused to do my bidding.  In fact, it did nothing at all.  Mac just sat doing nothing and not making a sound, not even a beep.  The silent treatment!
Mac and I were friends I thought.  It was suppose to be reliable and would not let me down like those PCs.  The place on my desk where it occupied left a hole not only on my desk but also in my heart (slight exaggeration!).  I had my ipad, but you know it was not the same.  Interestingly, before Mac started to let me down, first by responding slowly to my commands, then not at all, I enjoyed my ipad.  I’d walk by Mac not giving it a second thought and sit by the fireplace content with my ipad.  But then when it was no longer available I missed my Mac.
Seven hours later… Hubby “I know you said you didn’t want your anniversary gift yet, but under the circumstances would you like to have it now?”  “Hmmm, okay” I replied.  It will be our 18-wedding anniversary on the 11th.  The suggested gift for this year is porcelain.   When I unwrapped the gift I didn’t find porcelain (Not that there is anything wrong with porcelain, you know) what I found instead was light, airy and so adorable.   A MacBook Air!  So doing my happy dance now.
Posted by ToBlog today at 7:01 AM 4 comments:

It was a Dark, Cold and Scary Nite 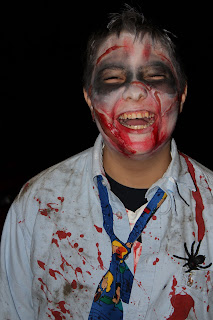 The zombies came out 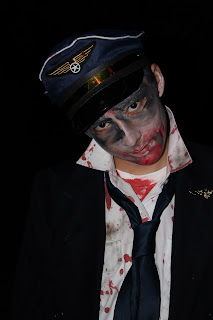