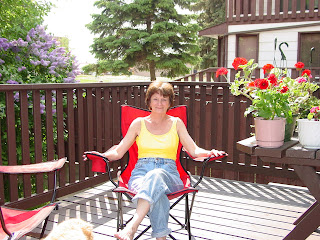 
We first met when I knocked on her door first thing one sunny summer morning, when I was just a teenager.  Whoa!  Big mistake!  That’s when I discovered that she was not a morning person, especially not before her first cup of coffee.  I never made that mistake again.  We became fast friends, and have been friends for over thirty years, in spite of my initial blunder.
Over the years we have shared many laughs, tears, talks and meals. I can honestly say that we’ve never had a disagreement; she never said anything to me that could be misunderstood or hurtful.  No matter where our lives took us, she has always had a way of making me feel truly special, beautiful and accepted.  If I’ve gained a few pounds she’ll say: "You look great."  And when I say I am on a diet, she'll say: "Don’t lose too much weight."   Always complimenting my hair if we haven’t seen each other in a while, saying: "This suits you so well, what a great haircut."
She has never driven because of an accident she had while learning to drive. So, I'll pick her up and we’ll have our ‘private girl talks’ at a restaurant.  I enjoy dining with her because she gets immeasurable pleasure from eating.  I never met anyone who adores food like her. I guess, you could describe her as a foodie before the term became popular.  She takes her time eating, delighting in every bite.  She’ll say: “Don’t mind me, I’m a slow eater. Well, I’m more of a picker, I like picking at my food.”  Then she’ll laugh.  Our meals can last several hours.
We have always enjoyed long talks about everything under the sun. Sometimes, our best discussions have been while she did my nails.  “You have to really get under these cuticles to have healthy nails,” she’ll say.  I agree; after all she has the most amazing natural nails and she has saved me tons of money.  Although she doesn't have any formal education on physiology she has an intuitive skill and can read people like no other. And she dispenses advice to me, often saying: “Listen to me, I know what I’m talking about, just watch.”   She has always been right of course.  She knows.  She knows more than people give her credit.
I can never really surprise her because when I show up at her door unannounced she’ll say: "I was just thinking about you.  Should I put on some tea?"
She has this uncanny way of knowing what you needed.  When I lived in Edmonton, whenever I was sick I’d go over to her house.  Most people would say: "What are you doing here when you’re sick"? But not Margo. I’d snuggle under the blanket she'd bring to the couch and she’d make me tea and bring me cookies.  She is happiest when she is taking care of somebody.
If you look for the definition of a ‘true friend’ you’ll find her name in bold.  But you what, in as much as she makes me feel unique, I have a suspicion that I'm not the only one who is lucky enough to be her friend. To be Margo's friend is to be a forever friend.
Posted by ToBlog today at 6:00 PM

That is sooo beautiful Angelina <3 I was just telling Mel today how she loved to take care of people when they are sick. She was the best nurse, but I must admit that it has made me kind of a suck when I am ill :) It is one of her wonderful qualities that I believe I have inheriated and I am forever grateful.........

Thank you Alisa she is a gem and a sleeping beauty.