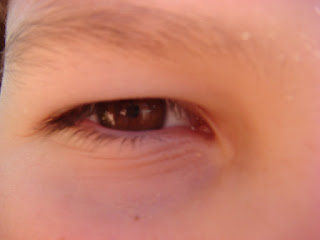 On October 14, 2009 my 11 year old son had surgery to correct strabismus, a surgery he had when he was five years old. Sometimes the surgery has to be redone, which is what happened here. We were concerned, as all surgeries carry some risk, but Andrew was a trooper, even cracking a joke or two before they lend him down the hall to the surgery room. After examining him today at his post-op appointment, his doctor was very pleased with the results of the surgery. As the day progresses, he continues to heal and even played some piano with an icepack covering both of his eyes.

I often wonder about the difference between facebook and twitter as social tools and this provided an opportunity to see how each on-line community reacted to this story. Yesterday before his surgery I posted two messages one on facebook, and another one on twitter. Returning the message on twitter several times throughout the day to catch people on different time zones. I have 158 friends on facebook and 252 followers on twitter.

I received over 70 email messages or post on my wall inquiring about and sending get well wishes to my son from facebook. Some facebook friends I have not met in person were the first to comment. On twitter, I received 2 returns and three good wishes to pass on to my son. Hmmm, interesting don't you think?

Hi Angelina,
I'm very glad your son is getting better after the eye surgery procedure.

Thanks, he is doing well but still a lot of swelling and redness.

Wow. Yeah, I guess I can see that being the case (The FB vs Twitter debate) Facebook requires that you actually KNOW the person (AKA that whole invitation to be friends thing)
where twitter is more social networking with ppl you may not know.

I have trouble w/FB...it doesn't like my laptop and slows it down terribly.

I hope your son continues to improve!

The problem I have with fb is that friends are always sending you applications to join. That likely is what is slowing your laptop.

I ignore most of the games and concentrate on status updates and wall messages. It is a good tool to keep on top of what people are up to. I also keep my list of friends to a manageable size.

Yes, Andrew is continuing to get better, and will be going to school on Tuesday. Thank you for asking.